Lead Guitar- How to Make the Right Decision

As a professional guitar teacher with 25 years of experience (see guitarlessonspoway.com).

What is Lead Guitar? 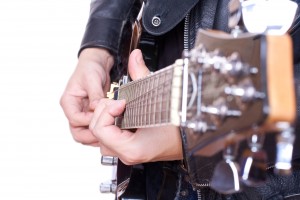 The lead guitar is named after its essential role in a music track, that is, outlining the melody or filling out a gap in a vocal track with an instrumental solo. Powerful guitar lines are often associated with heavy metal music, but you’ll also find great examples of lead guitar in jazz, blues, rock, country, pop, and other genres. The lead guitar is more present in modern music than ever before.

Important skills that all lead guitarists must master are those frequently taught in lessons. These include: bending, vibrato, and slides.

Bending describes an action that sounds exactly like what it is. The effect is created when a guitarist pulls or pushes a string up or down parallel to the neck of the guitar. The top three strings of a guitar are normally pushed, while the remaining three are normally pulled – either way, the note raises in pitch.

Vibrato is most commonly associated with violin music that is played with feeling. Most players and listeners remark that this effect adds feeling and emotion to each note. It is accomplished by quickly bending a string up and down or applying pressure towards the neck and then bridge repeatedly. It’s important to use the wrist and not the fingers when performing a vibrato.

Slides are an easy way to add a sense of proficiency to any piece of music. A slide creates a sound on a guitar that “slides” from one note to another without any of the notes in between being emphasized by plucking. There are two kinds of slides. The first, is the legato slide which is accomplished by strumming the first note and sliding down to a final note. The second, the shift, is accomplished by by fretting a note or chord an then shifting down or up to a different fret.

One of the most useful lead guitar skills that can be taught in lessons is the practice of creating lines to play during various songs. You can incorporate vibrato, slides, and bending into these lines if you wish. To come up with the notes for these lines you can use scales, modes, arpeggios, pieces of riffs you’ve heard, etc. Learning scales like the pentatonic, blues scale, major scales and minor scales will provide a good foundation for learning to improvise. Improvisation is one of the key roles of lead guitar and a tradition honored by a long history of guitarists.

Combining creativity, practice, and experimentation with the basic foundations of lead guitar from lessons can lead to the creation of amazing music. The possibilities are unlimited when you think creatively from a solid foundation.