How to tune a guitar

Home / Free Resources / How to tune a guitar

As a professional guitar teacher with 25 years of experience (see guitarlessonspoway.com), people sometimes ask me whether they should learn guitar tablature or standard music notation. This article and video explain each form of notation and I also give some guidelines as to which notation guitar students should learn. I have included the video I recorded at the end of this article.

It is recommended that you memorize letter names of your guitar strings. Hold the guitar in a playing position. The closest string is the 6th string (fattest). It is a low E. The thin string is the 1st, closest to the floor. It is a high E. 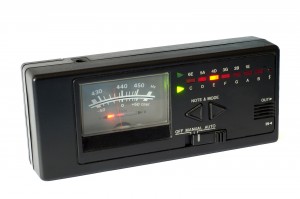 The best way to tune your guitar is an electronic tuner. There is a built in microphone for acoustic guitars. Electric guitars can plug right into the tuner. A visual display (a moving needle or indicator lights) will read the string vibration. It will advise you to tune the string higher or lower. Turn the peg tighter to raise it pitch higher, loosen the string to lower the pitch. The Guitars with three tuners on each side can be tuned by this following procedure. Tighten the sixth string, fifth string, fourth string by turning the pegs counter clockwise, and tighten the third string, second string, and first string clockwise. Lower or loosen the strings in the opposite direction. To tune a guitar with six tuners in a row, turn all the tuning pegs counter clockwise to tighten the strings. Loosen the string by turning clockwise. Always tune the string from a lower pitch up to the correct note.

If you don’t have an electronic tuner you will need a reference pitch from another source. A tuning fork, another guitar or even a piano/keyboard can work. Start off with tuning the sixth string E