An Introduction to Electric Bass Guitar

The most overlooked instrument in modern music is the bass guitar. While the drummer, the guitarist, and the singer are all vying for your attention, it’s the bassist who holds the music down and provides that essential connection between melody and rhythm. In this article, we will review the origins of the electric bass guitar, the primary design styles, and its usage from its conception through the present.

Origins and Development of the Bass Guitar 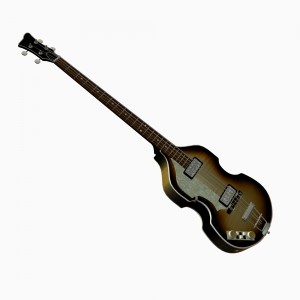 The first known electric bass guitar was manufactured in the 1930s by Seattle-based inventor and musician Paul Tutmarc, but it wasn’t very successful. Leo Fender developed the Precision Bass, which made its debut in 1951. Minor modifications were made in the mid-50s. Since then, very few changes have been made to what quickly became the industry standard. The “P-Bass” is still the most commonly used bass guitar, and multitudes of copycats have been made by other manufacturers.

A few years after the P-Bass, Fender introduced the Jazz Bass. It had a slimmer, easier-to-play neck and two pickups, one close to the bridge and the other close to the neck. This allowed for a wider tonal range. Despite its name, the “J-Bass” is widely used in all genres of modern music. Like the Precision, the Jazz’s shape and design has been emulated by numerous guitar makers.

Not to be outdone, Gibson introduced the first small-scale violin-shaped bass guitar, which could be used upright or horizontally. They then developed the highly regarded EB series, with the EB-3 being the most successful. They followed with the popular Thunderbird, which was their first 34” scale bass. 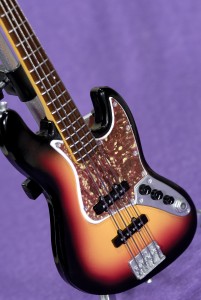 Another popular line of basses is the Music Man line, developed by Leo Fender after leaving the company that bears his name. The Music Man Stingray is known for its deep, punchy tone and classic design.

If there is a single bass guitar associated with one player, it is the Hofner violin bass, which is now commonly called the Beatle Bass because of its association with Paul McCartney. The legendary singer-songwriter cites its light weight and its ability to easily adapt to left-handed playing as his reasons for using it, even 50 years later.
Although there are numerous other basses available, the vast majority of basses are these models and their copies.

From the jazz era to the early days of rock and roll, the upright or “double” bass was used. As both jazz and rock progressed, and the portability, ease of play, and tonal variety of the electric bass became evident, the electric bass took off. From 1957, when Elvis Presley’s bassist Bill Black “went electric,” through the tasteful bass lines of Paul McCartney, the psychedelic bass innovations of Jack Bruce, the mind-blowing jazz lines of Jaco Pastorius, to the innovative progressive lines of Tony Levin and Chris Squire, the bass guitar has become an unstoppable force in music.

Today, bass looms large in hip-hop and dubstep, in metal, lounge, and all other types of modern and classic pop music.