The Most Famous Guitars in Rock History

Home / Free Resources / The Most Famous Guitars in Rock History

The Most Famous Guitars in Rock History

No music on earth has put the guitar at the forefront of its genre more than rock and roll. Since the 1950s, many artists were known almost as much for the guitars they played as for the sound they created with them. Although most rock guitarists use multiple instruments, often they are known for one primary guitar. Let’s look at some of the greats, and what guitars they used.

Originally from Seattle, Washington, Hendrix first hit it big in England. Soon after, he exploded on the world stage at the Monterey Pop festival in 1967. Four years and four legendary albums later, he was gone. His influence has spread through all sub-genres of rock. It would be hard to imagine modern rock or metal without him. Hendrix played a Fender Stratocaster. It was with a reverse headstock because he was left-handed. 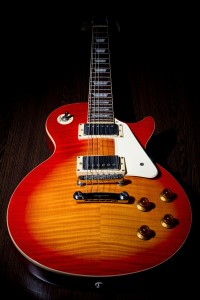 In 1966, already-renowned studio guitarist Jimmy Page joined the great Jeff Beck in The Yardbirds which would later evolve into Led Zeppelin. His songwriting, production, and guitar-playing skills are unmatched. Since Zep’s breakup, he has composed numerous movie scores, recorded with David Coverdale of Whitesnake fame, and reunited with the surviving members of Led Zeppelin for a concert in 2007. Jimmy page plays a Gibson Les Paul Classic, and his own signature Les Paul.

This celebrated blues/rock guitarist also played in The Yardbirds. He toured with John Mayall’s Bluesbreakers before forming Cream in 1967. After their stormy breakup, Clapton continued with Blind Faith and then Derek and the Dominos before settling in to a long and successful solo career. His style ranges from blues to country to hard rock, and his MTV Unplugged album remains one of the bestselling albums of all time. Eric Clapton plays a Fender Stratocaster nicknamed Blackie.

Satriani first came onto the scene in the 1980s with his lightning-fast, melodic riffs. After a brief stint with the Greg Kihn Band, he took off on a solo career. His second album, Surfing with the Alien, took him to the heights of rock stardom. After many successful projects as a solo artist and band member (including a one-off tour as replacement for Ritchie Blackmore in Deep Purple), he became a member of the supergroup Chickenfoot. Joe Satriani plays Ibanez guitars, including the JS 100, JS 1000, and the JS 1200.

Still going strong after over 40 years as bandleader, Carlos Santana is one of the most passionate guitar players in the world. He helped introduce the Latin influence to rock music and continues to be a popular presence in the studio and on the stage. Carlos Santana plays a Gibson SG and the PRS Santana.

Decked in his famous schoolboy outfit, Angus storms stages all over the world with AC/DC, delivering his signature high- energy riffs. With AC/DC, he has performed on some of the most legendary rock albums ever released, including Highway to Hell, Back in Black, and For Those About to Rock. Angus Young plays a Gibson SG Signature Model.

There is nothing in rock like the opening riff of a Rolling Stones song. From Satisfaction to Brown Sugar to the recent single Doom and Gloom, you know you’re in for a wild ride when Keith opens up. His songwriting and playing skills haven’t diminished in 50 years. Keith Richards plays an open-chord tuned Fender Telecaster with 5 strings. He also occasionally plays a Gibson Les Paul.

As you can see, the style of guitar varies as much as the style of the player. What will be your signature model?