Electric bass guitar has been at the forefront of rock, pop, country, and jazz music since the 1950s. Although many players tend to keep their playing simple, some have progressed beyond “holding down the 8th” and making a true artistic statement. In this series, we’ll have a look at some different bass styles and sounds. 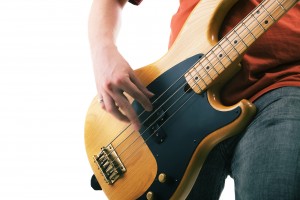 A marriage of Rock & Roll and more complex genres, such as classical and jazz, began to emerge in the mid-60s. Inspired by the sonic innovations of The Beach Boys (PET SOUNDS), The Beatles (SGT. PEPPER) and other bands, musicians realized the potential of moving past assumed limits of rock music.

With the commercial success of DAYS OF FUTURE PASSED by The Moody Blues, the era of progressive rock began. Progressive rock is known for its often-complex rhythmic structure, advanced melodicism and deep (sometimes downright esoteric) lyrics. In many of these bands, the bass is virtually a second lead guitar, adding an essential element to the melody. Perhaps the bassists best known for their work in this genre are Chris Squire of Yes (The only constant member through multiple lineup changes) and Geddy Lee of Rush (also their distinctive lead singer).

Virtually simultaneous to the emergence of progressive rock, funk emerged from rock and the R&B sounds made famous by Motown, Stax, and other labels. Funk took R&B, pumped up the bass, and partied hard. James Brown led the pack with his signature sound. Two members of his backup group, William “Bootsy” Collins and George Clinton, soon branched off into Parliament/Funkadelic. (Parliament and Funkadelic are essentially the same band, with Funkadelic recordings having a harder-rocking, socially conscious feel, and Parliament being straight-out funk dance music.) Bassist Bootsy branched off on his own, and has had an illustrious solo career in addition to his continued presence in the “P-Funk” universe.

As funk emerged, well known R&B acts such as Stevie Wonder and The Temptations began incorporating funk onto their sound. The final album Jimi Hendrix released before his death, BAND OF GYPSIES (with bassist Billy Cox), contained a stronger funk element than his earlier work. As the 70s arrived, new acts such as Tower of Power (featuring Rocco Prestia on bass), War (B.B. Dickerson), and Earth, Wind and Fire (Verdine White) took funk to new heights, and at the same time, made funk a viable commercial force. Funk still looms large in music to this day, particularly in Hip-Hop.