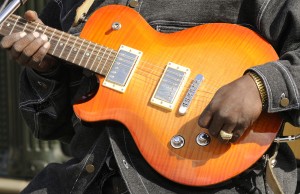 People who are left handed often get the short end of the stick. Most musical instruments, writing implements, keyboards, etc. are often designed with right handed people in mind. If they do have a left handed design, it is often done only as an afterthought. Throughout history, left handed people were outright discriminated against and royalty born left handed were forced to use their right one.

When it comes to left handed guitars, ones designed for a right handed person simply won’t do. It is the natural tendency of a person to strum a guitar with their stronger hand. Not only that, but the order of the strings is reversed when a regular guitar is played with the left hand. Some merely offered that “lefties” should learn backwards. This idea was supported by the fact that Jimi Hendrix used to swing his guitar around on stage and play it backwards with perfection.

However, for the beginner, a true left handed person, this proved to be nearly impossible. After a few attempts and encountering some songs written for playing the guitar the proper way, many students gave up. Thus, the left handed guitar was born, finally embracing the idea that it is natural for some people to be left handed and this should not be a disadvantage.

Like with all guitars, the person who is planning to play the guitar should go into the store and try different types of models. This is especially true for left handed guitars. If you must buy online, go into the store first and find a model you like and try to buy that same model, or an extremely similar one. When in the store, try to get a feel for the instrument, you may find that it is in fact easy for you to adapt to a traditional instrument, in which case it’s not necessary for you to get a left handed one. There are many examples of left handed persons who are ambidextrous and can produce quality work with what some would call a “regular” instrument.

Keep in mind that a small guitar shop is likely to have a limited left handed guitar section, you may have to find a traditional guitar that you like and ask the store to see if there is a left handed version that they can order for you, or that you can acquire for yourself online. Of course, don’t get your heart set on any traditional guitar as they don’t frequently have left handed counterparts. If you can’t find an exact counterpart, talk to a professional and see if there is a left handed model that is comparable.

In many cases, it’s helpful to get a guitar teacher that understands the brands and models that are out there. They can be a great resource for helping you choose a guitar that suits your needs, whether you are a beginner or are more experienced.

Being left handed, clearly, should never discourage or impair someone from doing something. It goes without saying that there are not only right handed people in the world. When searching for a left handed guitar simply make the same decisions that any other consumer would make in a comparable market place. Of course, it’s easy to get discouraged when the selection is so minimal, but don’t give up hope! Know that your searching and work will pay of in the long run. Purchasing an instrument is similar to making an investment. You can hand the instrument down for generations, or resell it, but only if it is of good quality.

Never let anything get in the way of creativity, especially the difference between being right and left handed. If you need some inspiration, there are plenty of sites on the web that focus solely on servicing left handed players. They have tips and tricks for the left handed player, much like a music teacher they can direct you to reputable brands and awesome guitar models. If you put a good amount of time and effort into your search it will pay off in the long run and you will be proud of your accomplishment.